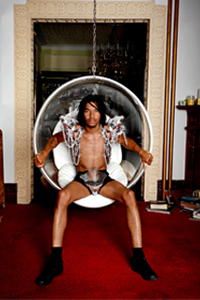 This story was a long time in the making. For quite some time I had my eye on the colourful rooms of The Darling Mansion and was looking for the perfect designer that would match the eccentricity of the rooms without getting lost in this marvelous house. There was no better designer for this than Rocky Gathercole – designer to stars such as Toni Braxton, Paris Hilton, Jennifer Lopez etc. his eclectic and avant-garde pieces were simply a dream and strong enough to stand up to the task. I also needed a full crew of models, hair and makeup artists that could understand the demands of such a complicated scene and pull it off in a high fashion sense – because such a shoot could border on becoming “costume-like” if we weren’t careful. The inspirational theme behind this shoot is “circus” – Aluad in her golden cage being the ring leader. Many artists play a role within themselves that is emoting creation and imagination. This editorial embodies this concept. It is up to the reader to determine how to interpret these images and the roles the models are encapsulating.