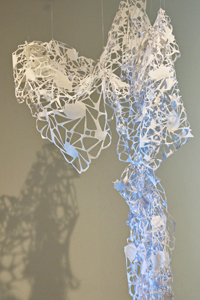 Made entirely from deconstructed, hand-cut men’s shirts (rescued from thrift shops) my work raises awareness about our enormous problem of textile waste. Canadians toss 14 kilos of clothing per person, per year.  95% is recyclable, yet 85% ends up in landfill.  If we took all the textiles thrown into Canadian landfills over twelve months, we could build a solid structure as wide and tall as the Rogers Centre, three times over! Artists can be leading the way with innovative and inspiring reuse, taking what was headed for the ignoble dump and reclaiming it –with dignity, purpose, and whimsy– as art.

Originally from Montreal, Susan Avishai has a BFA (1971) from Concordia University, with additional study at OCAD, and the Académie Julien, Paris. She received an MA (2002, Hollins University, VA) in creative writing and literature. She resides in Toronto after years in Jerusalem, New York, Boston, and Ottawa.  Susan has mounted 16 solo shows, won many prizes in national and international juried exhibitions, and is represented in several large corporate collections, among them Fed Ex Canada, and Bell Canada. She was elected into the Ontario Society of Artists in 2015.

Her new work has appeared in Fiber Art Now and as featured artist in Australia’s Textile Fibre Forum. She was a presenting artist at the 3rd International Textile Symposium in Daugavpils, Latvia in October and a piece of hers is in the permanent collection of the Mark Rothko Centre there.