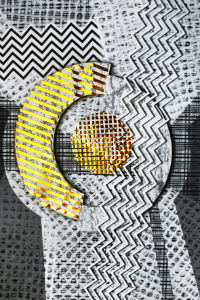 This project investigates the subjective boundaries between art, applied art, and fashion.  At the core of this concept is “Entartete Kunst” (Degenerate art), a term adopted by the Nazi regime in Germany to describe the Modern Art they so despised. This project draws parallels between Fashion/Textiles, and the Bauhaus, Cubism, and Dada artistic movements, which were condemned as degenerate at the time.

Fashion, often viewed as frivolous and of a female domain, can ironically be seen as degenerate compared to Art, her historically male-dominated counterpart.  This project invites the viewers to challenge this sexist and dated conception. In the photo series, we see artworks in various stages of existence from flat collage artworks to prints sewn into garments, thus questioning the boundaries and polarization of art and fashion. When does it become art? If the primary human drive is the pursuit of what we find meaningful, then fashion and textiles are a vehicle just as worthy as any other form of art.

This collaboration includes the original collage textile prints and fashion by Zoran Dobric, photography by Draga Jovanovic, and props and set design by Stephen Severn.

Zoran Dobric collection offers women an individualistic and creative expression. Zoran’sdesign background comes from London College of Fashion in UK and Instituto Marangoni in Milan, influencing his European approach to fashion as fine art. Zoran’s work has been published in magazines and books from the USA, UK, Germany, Spain, France, Kuwait, Japan, Canada and China. His designs were also featured in group exhibitions in London UK at the prestigious Victoria House UAL Exhibition (2013), and at the Sex and Death exhibition in Covent Garden (2012). Commissioned by Sheikh Majed Al Sabah, the designer’s work was shown at Al Sabah Gallery (2009, Kuwait City).   Zoran Dobric won the London UK based Shaftesbury Award for emerging designers, resulting in a pop-up shop / exhibition in London UK in July 2013. Using fashion as an artistic expression, the designer creates original textiles by implementing digital print, laser cutting, block printing, embroidery, shibori pleating and other artisanal techniques. More info at www.zorandobric.com

Draga Jovanovic was born in former Yugoslavia. She completed her Bachelor’s degree, faculty of drawing, painting, sculpture and graphics at the Academy of Fine Arts, Novi Sad, Serbia. On completion, she went to Germany where she got her Masters degree at Kusthochschule Kassel, University of Kassel, Germany. The Masters degree included painting, photography and video. After finishing it, she decided to leave Europe in order to live and work in Toronto, Canada. In mean time she has been working on various different projects and exhibiting all around the world including: Serbia, Greece, France, Switzerland, Russia, England, Italy, Germany, Portugal, Ireland, Montenegro, Bulgaria, Canada, USA, Mexico, Italy, Spain, Switzerland, Sweden, Egypt etc.

Stephen Severn loves objects and things and moving them around. He has over 10 years experience as a prop stylist and set designer executing and developing creative direction for both editorial and commercial clients. Passionate about art and design from a young age, he studied Fine Arts at The University of Toronto and Interior Styling at Central Saint Martins (University of the Arts London). His career started in Visual Display at some of the world’s most iconic brands (Holt Renfrew and Hudson’s Bay Company in Toronto, and Anthropologie, Selfridges, and Harrods in London, UK). Working for one of Canada’s largest photography studios, he further honed his skills in set and prop design, off-figure, table top, and roomset styling for clients that ranged from fashion to food, cars to cosmetics. Stephen is currently represented by Judy Inc. in Toronto.