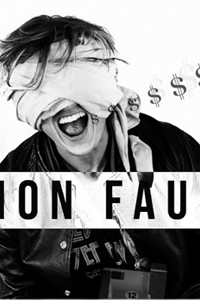 Fashion Faux Pas (don’t believe what you see on television) is a project that grew out of the work I’ve been doing with immersive video art installations and fashion. This project is meant to be multidimensional: the televisions display fake news infomercials preaching negative stereotypes of the fashion industry while the signs and podiums contradict them (don’t believe what you see on television). The piece is rounded out with models wearing the words “(don’t) look at me” – continuing the theme of contradiction as those of us working in the fashion industry often feel bombarded with conflicting opinions and viewpoints.

David Cash is a Toronto born multimedia artist working primarily with video, photography, fashion, and interactive events. David began working in the entertainment industry at the young age of 6 as a child actor and performer. 16 years later he finds himself working in many areas of the creative world from running video for Pride Toronto to exhibiting his artwork internationally. David made his debut into the art world specifically in 2017 with his self produced solo show ‘RED’ featuring 14 large scale prints photographed by Cash as a limited edition collection. The show was very well received, selling out during it’s week long run and being deemed one of he “top 10 art shows in Toronto” by BlogTo amongst other news outlets. Since then, Cash has had several opportunities to showcase his artwork including being a featured designer in last years 2018 FAT runway show, producing and showing in his subsequent Toronto group show ‘Fete Gallante,’ exhibiting works as a video installations in Rome Art Week and the Miami Fashion Film Festival, and finally having his artwork and designs shown this past fall in the Tumbler & Tipsy New York Fashion Week show, and immediately after showing his debut international solo art collection ‘Cash Only,’ also in NYC. On top of this, Cash has had his films featured in over 50 festivals internationally from Los Angeles to Mumbai and has had his photo and fashion work published all over the world in a range of print and digital publications including Vanity Teen, Getty images, CBC, Elléments, ArtNet, Artsy, FWO, Vulkan, NOW, The Toronto Star, and over 80 others. Cash is very excited to return to his F.A.T family this spring and has a number of surprises in store for everyone in attendance!

For media, sponsorship, volunteer and all other contacts, please visit our CONTACT page.