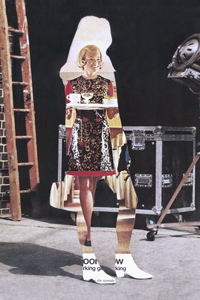 The process of deconstructing images to create something completely new is my current ongoing obsession. Using traditional collage techniques I repurpose popular magazines, photograph the work and then alter the image digitally. This recent series explores the similarities and differences of how women are depicted in popular contemporary fashion magazines such as Vogue with those found in vintage sources such as National Geographic. The images explore how women have been depicted working or seemingly doing work and questions women’s perceived role in the work force and examines how, and if, it has changed. The cold irony in using fashion magazines is that it is one of few industries where women consistently make more money than men.

Erin studied Painting, Drawing and Art History at York University in Toronto earning an Honors BFA, followed by a B.Ed. From Brock University. Although originally trained in painting and drawing Erin has been producing analogue and digital collages for the past several years. Erin has exhibited in local galleries and sold her artworks to private and corporate collectors. Erin currently works and lives in Oakville, Ontario,