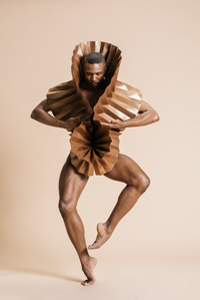 French prononciation. A mouvement in which a dancer bends the knees and straightens them again, usually with the feet turned out and heels firmly on the ground.

Bent (something flexible and relatively flat) over on itself so that one part of it.

Combines both dance and paper art lexicons and techniques. Expressing how both « bodies » fold and unfold through movement and flexibility showcased in a photo series shot in 4 international cities, Montreal, New York, Rome and Paris.

Melika Dez is a Montreal photographer who stands out for her technical understanding and her dynamic sensitivity to the subject in front of her lens. Having trained as a professional dancer, it is no coincidence that the artist, after studying photography and an early career in commercial and fashion imagery, has developed a real visual expertise in the dance community. Her urban and poetic vision allowed her to work with internationally renowned companies including Les Grands Ballets Canadiens, the Alvin Ailey American Dance Theater, the Teatro Dell’Opera di Roma and the National Ballet. Her talent is not limited to classical dance; she also collaborates with the underground hip hop scene, a niche that allows her to fly to New York regularly. And when she is not capturing the arabesque of a ballerina in the street at rush hour, she devotes herself to the art of portraiture, a force she has been able to demonstrate in an impressive series of candid, real and vulnerable shots of some of the Canadian Football League (CFL) players.

Pauline Loctin alias Miss Cloudy is a sower of ideas, a multifaceted creative mind and an origami warrior: paper artist, idea-builder, trainer and prop stylist. Since 2013, she shares her knowledge and her desire to make contagious with workshops and unique and colorful paper creations with humor and creativity.