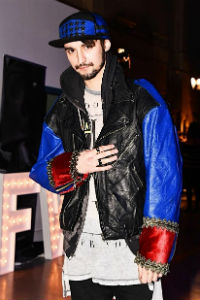 For my Spring Summer 2018 range of designs, I am combining a traditional aspect of regal aesthetic, while incorporating my trademark underground vintage fashion style. The initial idea was to take two opposite concepts, and in harmony, bring the two together to break the divide between high class and low class society. The show itself will begin with streetwear inspiration, with a monarch inspired take before the collection slowly transforms into more sophisticated look which will possesses an element of grit, grunge, and rock and roll which is what I am known for.

The “Underground Monarch” collection visually will begin with royal blue leather jackets, paneled with red velvet cuffs, trimmed with brocade. You will also see embellished gold brocade trimmings placed strategically on street bomber jackets for men and women. The pivotal moment in this collection will be the new way I am redesigning denim this season, which will be shown midway through the show. Thereafter you will see an introduction of the sophisticated part of the show through the form of tailored blazer dresses, paneled with deep wine paisley velvet’s, finished with top quality 10c YKK gold zipper trimmings. High end luxury cloaks will also be a new addition to my runway collection which will close the show. I am collaborating with Kirsten Garbutt (Blackgypsy.ca).

The initial concept of this line comes from the idea that no matter where we come from, we all have the power to be the kings or queens of our own choices, decisions, and lifestyles. One may begin their own journey below ground but it doesn’t mean that you can’t dictate later on that you want to branch out into a more sophisticated style while remaining true to who you are. I researched the modern royal British monarch fashion history for about three months before delving into my own personal street style roots which always was easy to tap into.

Canadian Fashion Designer Stevie Crowne, 23, designs his collections recycling top quality vintage and thrift styles. Deemed an Eco-Friendly label creating 2+ collections per year since 2011, he upcycles his findings into newer and more edgy-contemporary fashion garments. In this process, he breathes new air into vintage clothing by refurbishing the original idea into a new piece. The beginning process with each piece typically starts off by basic pattern grading to suit in trend styles and 2018/2019 silhouettes. Further in the process each garment goes through a complete 180° transformation using methods such as fabric dying, hardware embellishment, hemming, fabric-detailing, patchwork, embossing, other alterations, as well as collaborating with visual artists to produce limited edition prints and one-off bespoke creations.
In the last year, he showcased his Spring Summer 2017 “Ride Or Die” Collection at Fashion Art Toronto on April 21st, competed for Canada’s Sustainable Designer Of The Year Award sponsored by Fashion Takes Action on May 27th, and debuted his followup Spring-Summer Collection named “UTOPIA” at The 519 on Church Street in Toronto, Ontario on June 16th, 2017 before he showcased an 18 look collection for Youth Day Toronto at Yonge Dundas Square on July 23rd. Stevie most recently launched internationally thanks to the help of Perth Eco Fashion Week in November 2017, less than one week before showcasing a four look resortwear collection in Toronto onDecember 1st.