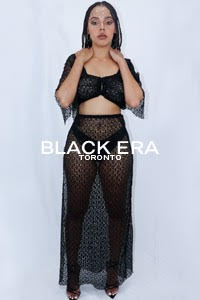 This collection represents the power of women in visual form. Each attire is created to portray the supremacy of a woman and her strength. The colours, shapes, and textures of the pieces emphasizes on the authority and strength of the female. In this collection, evening wear can be found to represent the elegant side of women and, corsets to represent the sexual freedom and the control of a women.

Black Era was founded by Akilah Blackman in 2016. The brand is known for its swimwear, however, recently Akilah (Creative Director) has rebranded Black Era by going in the direction of streetwear and couture. Black Era is specialized in corsets and evening wear (Gowns).

THE DESIGNER
Akilah is a young certified fashion designer who often categorize herself as a Narrator because she treats fashion like her own show/theater. She seeks to create characters with their own personalities and express them in her garments bringing them alive when worn by a model or client.

In her early years, Akilah would watch her mother sew her school uniforms and outfits. She was so captivated in sewing that she learnt how to sew her own pieces and at that time she fell in love with beachwear because she would go to the beach everyday after high school. In 2016 Akilah founded her own brand Black Era Swim (a brand that release collections each year with 10 styles of swimsuits) where she rebranded her brand in 2019. Akilah is fascinated with high end brands such as Ralph and Russo, Vivienne Westwood and Thierry Mugler because she see them as “Characterists” who she identifies with.